Warning: Use of undefined constant REQUEST_URI - assumed 'REQUEST_URI' (this will throw an Error in a future version of PHP) in /home/customer/www/borala.blog.br/public_html/wp-content/plugins/uber-grid/shortcodes.php on line 71
 Bonito, Brazil - 3 days itinerary, what to do | Travel tips - Boralá blog

the city of Bonito is one of those places that always spoke to me when I saw it in pictures. The color of the water was what made me want to visit this place, as well as the proximity to the Pantanal’s fauna and flora.

One week before our departure, the availability of going leaving on Thursday and returning on Monday took place, so we had 3 full days to enjoy Bonito.

We arrived in the city on Thursday afternoon. We stayed at “Pousada Jarinu”, that satisfied our need for comfort. Very well located and with the good service of Mrs. Luiza, the inn was our temporary home.

As we were two blocks away from the main street, we were able to visit some places like restaurants and the charming little shops that Bonito has, even on a Thursday.

→ where to stay in Bonito

Remember, always filter your search. Keep an eye out for promotions and
free cancellation policies. Do not miss out, book it!

On Friday, early in the morning, I looked for the agency that became partner with Bonito Way, that with their attentive staff guided me with regard to the rides, their degree of difficulty, the distance between one and the other, etc.

As we rented from Campo Grande, we were able to make the most out of the little time we had. Between the grottoes and extreme sports, the calm of the Balneario and the beauty of the dreamed Pantanal, we were in paradise.

Our activities were planned in half an hour and they could not have been more complete for 3 days. The idea was to see a little bit of everything, and I think we did well!

On Friday, we divided ourselves according to our profiles. My parents were with us on the trip, as well as our friend and photographer Joel.

Just imagine, a trip with three different interests, but that was what made it perfect!


Joel, the most adventurous of the pack, chose rappel down into the famous abyss Anhumas. The price of such action is far from being accessible to most Brazilians, but the beauty of the place, together with the adrenaline, made the BRL 950 (2017) adventure worth it!

In Bonito, most agency prices are fixed, what makes the difference is the way that the agencies offer their services. While the adventurous tours took place, my parents and I chose to go down the 300 steps to see the Blue Lagoon Grotto.

With a very good structure at the entrance, a brief lesson to understand the rock formation, and after buying our bottles of water, we started our way through the small trail that took us to the descent to the Lagoa Azul Cave.

The cave is very beautiful and its blue waters reflected by the light of the sun give that special touch to pictures. Price of the tour BRL 50 (2017).

In the afternoon, I went for a boat ride through the waterfalls, which is a very nice ride along the Rio Formoso. Its clear waters and waterfalls gave us an incredible ride through its 6 km.

While I was enjoying the waterfall, my parents were at the Balneario Municipal between monkeys and countless fish, resting under the shade in one of their cafeterias. The entrance fee was BRL 30 (2017).

During the rest of the afternoon, we continued visiting the different attraction in the city of Bonito. At the end of the day, we got together for a barbecue with the new friends we made at the Jarinu Inn.

We woke up very early so that we could travel the 170 km to the farm in Miranda in peace and, of course, to see the local fauna and flora in Pantanal.

The structure of the farm is something impressive. At first, we went out on a safari through the lands of the farm that has approximately 15,000 acres. On this tour, we saw many animals, including capybaras, snakes, alligators, Tuiuius birds, marsh deer and Rhea.

After the first tour, we went to lunch at the farm’s restaurant, which was already included in the amount we paid. Good food and plenty of tables!

After the swimming pool, siesta, shade, and fresh water, at 2 pm we left on the barge ride along the Miranda River. I particularly love being in places that have water, even the ones filled with alligators.

On the way back, an afternoon coffee was offered before we went back to Bonito. We arrived exhausted, but happy for the experience. Price for the day: BRL 210 (2017) with lunch included!

Being in Bonito and not going snorkeling is the same as going to Paris and not visiting the Eiffel Tower. We had two options, so we had to choose between the Sucuri River or the Prata River.

We chose Rio Sucuri for its reputation of being the most crystalline river in Brazil and the third in the world. The Rio de la Plata, also crystalline, is famous for harboring several species and a large number of fish.

For those who choose the river of the Silver, you have the chance to know also the Buraco das Araras, which is near the city of Jardim and on the same route.

The reception is on a farm that receives you with proper clothing and instructions for the river with regards to the use of the mask and snorkel. Another vehicle picks people up at the starting point and down the river.

We descended in wonder at the transparency of the water, following the course of the river without losing a moment of what was happening inside it. The fee of this part of the trip was BRL 168 (2017).

In the afternoon, we went back to the Balneário Municipal to enjoy a bit more of what the city of Bonito had to offer. Already on our last night, we went downtown, strolled in the square, went into charming shops.

Incidentally, there are good restaurants in Bonito. We suggest the charming Restaurant do João, the typical and delicious food from Joanita and the atmosphere and portions of the Taboa Bar. There are more affordable options around the busy main square, either in the stalls or in the restaurants that are there.

We went during the winter, extremely hot days with a cooler. But it is also drought season, when rivers have more fish and more crystalline waters.

During the summer, the heat is extreme during the night and the day, but because of the rain, the waters may be more turbid. If it’s a holiday season, especially carnival, book as soon as possible, but be warned, prepare yourself for the expenses. Bonito is beautiful, but it can also be expensive. 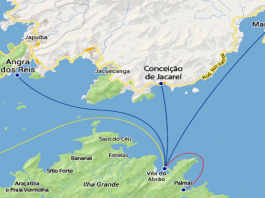 Gaspesie, the beauty of Quebec in Canada